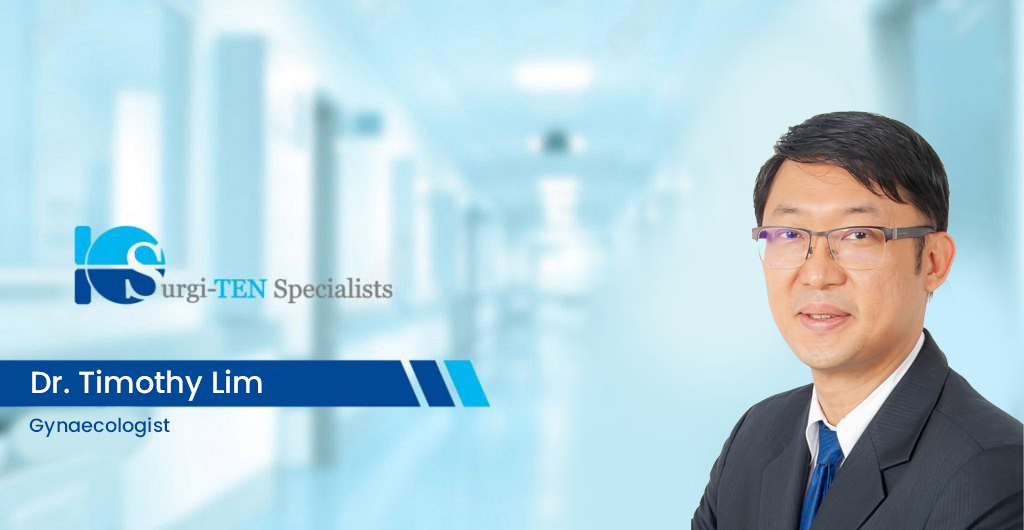 Dr Timothy Lim Yong Kuei is a specialist in Obstetrics and Gynaecology at Surgi-TEN Specialists, with a special interest in the management of Gynaecological cancers. He was instrumental in the development of minimally invasive Gynaecological oncology surgery as a standard of care in KK Women’s and Children’s Hospital (KKH) as well as starting the ICG-NIR sentinel lymph node biopsy services for endometrial cancers in 2016. He is also well-versed in fertility-sparing Gynaecological oncology surgery and has performed more than 12 abdominal radical trachelectomy procedures for early cervical cancer in KKH.

Dr Lim was formerly the Head and Senior Consultant Gynecologist of the Department of Gynaecological Oncology at KKH from 2014 to 2019 as well as the Deputy Chairman of the Division of the Obstetrics and Gynaecology (O&G) at KKH from October 2015 to November 2019. He was Adjunct Associate Professor at the National University of Singapore (NUS)’s Yong Loo Lin School of Medicine, Duke-NUS Medical School and Nanyang Technological University’s Lee Kong Chian School of Medicine from 2017 to 2019.

Dr Lim graduated from the National University of Singapore in 1998 and obtained the Membership from the Royal College of United Kingdom, O&G, in 2003. He started his Gynaecological oncology fellowship training in the Department of Gynaecological Oncology at KKH in 2006. He was awarded the Health Manpower Development Programme (HMDP) award from the Ministry of Health to train in minimally invasive Gynaecological oncology surgery in France from 2007 to 2008. He also obtained his Masters in Law in Medical Law and Ethics at the University of Edinburgh in 2016.

As a clinical researcher, Dr Lim has authored and co-authored more than 40 peer-reviewed papers. His main research interest is in cancers of the genital tract as well as complex pelvic surgery, including minimally invasive cancer surgery. He has also been invited to give numerous lectures at both local and regional scientific meetings. His passion in education has garnered him several teaching awards for both medical undergraduates and (O&G) residents. He was the course director of the colposcopy and management of pre-invasive diseases program in the Singhealth O&G ACP from 2016 to 2019.

Dr Lim also dedicates his time to professional education by serving in the councils of the O&G Society of Singapore (OGSS) and Society for Colposcopy and Cervical Pathology of Singapore (SCCPS) for the last 10 years. He served as the Honorary President of both societies from 2019 to 2020. He has a strong passion in public health education especially in the prevention and treatment of Gynaecological cancers and has helped organize numerous public health talks and professional O&G conferences including the RCOG World Congress 2018 in the last decade.

Dr Lim has been a volunteer doctor with the Singapore Cancer Society (SCS) for many years and is the Chairman of the Women’s Gynaecological Cancer Awareness Committee in SCS since 2014. He is also a committee member of Cervical Screen Singapore, Health Promotion Board as well as the co-chair of its cervical screening implementation subcommittee 2017/2018.

Dr Timothy Lim is also a selected panel specialist on the insurance integrated shield plan for: